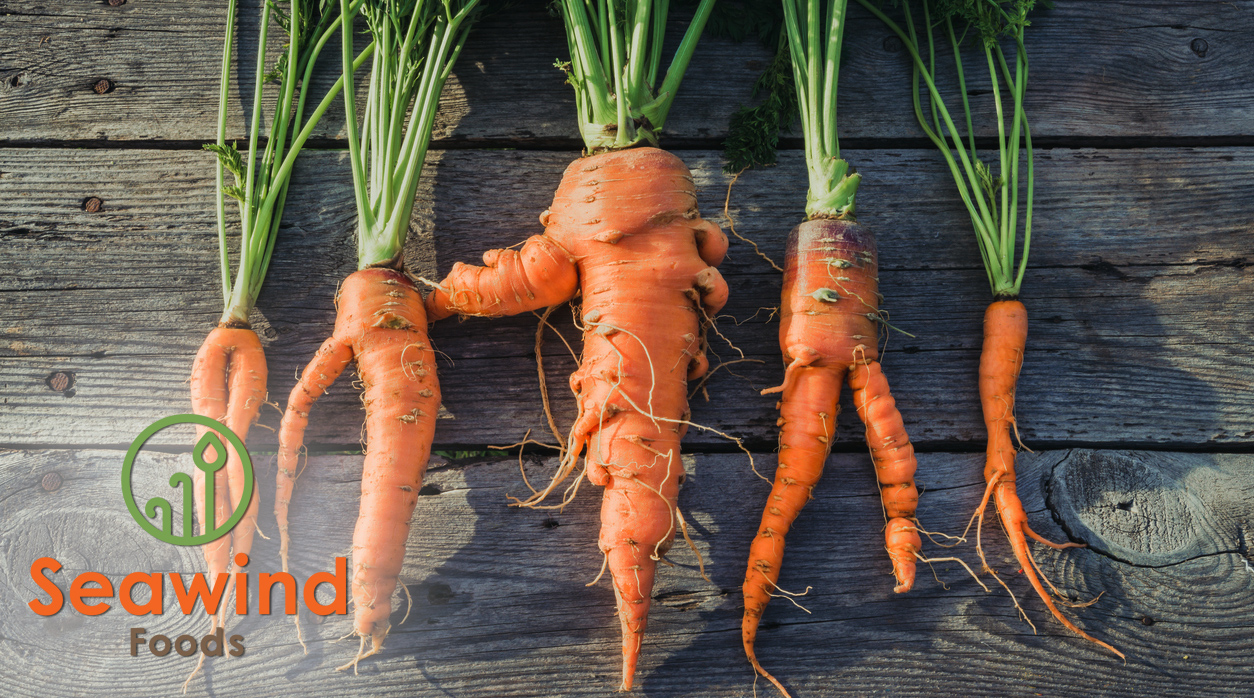 Globally food is being produced that is not making it into grocery stores and not being purchased by consumers. This food and the efforts required to produce it are being wasted. Food is ending up in landfills, leaving many people hungry and negatively impacting the climate. We as citizens, corporations, and manufacturers of the world need to become more aware of why food is being rejected and left to rot. Furthermore, we need to create avenues for how consumers and manufacturers can utilize these hideous yet nutritious crops. There is a claim being used that if produce does not look perfect then the consumers will not buy it. However, this claim is not true.

We have seen campaigns from various groups, ranging from entrepreneurs to international governments, pushing for this ‘ugly produce’ to be sold in stores as to reduce food waste. Their efforts put deformed fruits and vegetables in the spotlight with a sign that states why they look the way they do and how buying them will help minimize food waste.

Intermarché, the third-largest French supermarket, launched their campaign “Inglorious Fruits and Vegetables” in early 2014. They created fun ways of marketing their misfit produce, such as “The Failed Lemon,” “The Ugly Carrot,” and “The Grotesque Apple.” They also made soups and fruit juices out of the produce to show consumers that the disfigured produce did not alter their taste. To make it more enticing to consumers, Intermarché offered the gnarly produce at a 30% discount. Consumers bought it. They bought it all. In fact, the produce sold on average 1.2 tons per store in the first two days and increased overall store traffic by 24 percent.

Farmers love this ugly food movement. Instead of throwing away their resources and efforts because the produce turned out to be less than perfect, farmers earn money that they have been missing out on due to perfection standards. Produce is constantly rejected by grocery stores due to unattractive markings that occur naturally due to weather conditions.

In an interview with The Guardian, Wayde Kirschenman—a Bakersfield, California farmer—describes that about 25% of their harvests are thrown away or fed to cattle. And 25% is just an average, he states that at times it can be much worse. Jay Johnson, a Florida Farmer who also spoke to The Guardian, stated that because of spring storms, his spaghetti squash developed a brown scoring on the rind from high winds. In total mentioned, he struggled to sell an estimated 275,000 pounds of produce because grocers would see the brown rind and turn him away. Johnson had even lowered the price to just six cents a pound and “no one was pulling the trigger.”

Thinking about all that a farmer puts into their harvest, it is devastating to think that for decades we have been throwing away perfectly nutritious food because of some small instance of poor weather. All of the fertilizer, water, land area, man hours, and time is lost when we throw away funky produce that would otherwise pass USDA standards. Grocery stores frequently turn farmers away even if only one bin of lettuce has some type of disfiguration. This is a huge loss for farmers and for our societies all together.

What does this mean to manufacturers? What can food processing companies do to help this movement and stay with the global trends around food? Do not discriminate against ugly produce! A lot of resources and effort goes into producing food, if your company is going to chop it up, mash it down, or juice it, your customers will not know that the apples used to make their apple sausage looked a little strange at some point in time. Produce does not change its flavor if it is ugly. Your company may be able to strike a deal with your farmers for their ugly produce! Your farmer was about to toss it anyways. Offer your farmer a deal and utilize every piece of produce you can!

Seawind Foods is a great example of a company who is staying ahead of food market trends. Their focus, since 1987, has been on sourcing and supplying all natural, NO S02 dehydrated fruits, vegetables, and spices. All of their ingredients are non-GMO, certified Kosher, and are GMP, FDA, USDA and HACCP compliant. They are committed to making sure all of their products are safe, testing all of their ingredients systematically internally and by a third party laboratory, so each product comes with a Certificate of Analysis (COA). Seawind Foods sells their food to other companies who create finished products such as meatballs and sausages, fruit bars, pet foods, and other food products that utilize dehydrated food products as ingredients. Seawind Foods does more than staying ahead of the latest food trends for the labels they supply. Because Seawind Foods’ fruits and vegetables are dehydrated, every piece of ripe produce is used, no matter its cosmetic appearance.  This is a great thing for everyone, including those who play a role from farm to fork and the planet, by reducing landfill excess food waste and harmful greenhouse gases.

Trends in the food production market are being watched and altered by consumers who are expecting their favorite companies do the right thing for the environment and their customers. In this same instance, buying less than perfect produce helps the farmers from which you source your products, translating to an appreciation for the resources and effort that goes into making your products.

Be a food market leader, be a champion for the environment, reduce food market waste by buying and utilizing less than perfect produce for your products. Let’s use the produce we have already invested resources into, to minimize food waste and feed people!